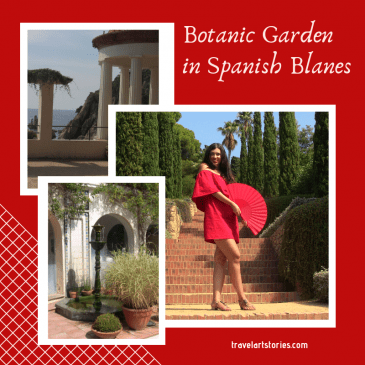 Botanic Garden in the Spanish city! I fell in love with Blanes, Spanish – Catalan city that located one hour away from Barcelona. This is a small, cosy, not famous among tourists place, which, probably more looks like a village. I’ve already posted about Costa Bravo vacation and some photos of Blanes.

Marimutra Botanic Garden in The Spanish City of Blanes was founded in 1921. On its territory grow more than 3000 plant species brought from various regions of Spain, South America and Africa. Here are 3 main climatic zones: tropical, subtropical and Mediterranean. In turn, each of these zones is divided into 6-8 zones: Mexico, Japan, China, the Canary Islands and others.

Botanic Garden in the Spanish city

September is a vacation time, when we pay for another summer month. I have been to #Barcelona and #CostaBravo and next post I will make a full review of these most common vacation destinations. Belive me, I will tell you more than any guide or tourist agency! Сентябрь это еще время отпуска когда мы платим за еще один летний месяц. Я побывала в Барселоне и Коста Браве и скоро дам ревью на эти популярные курорты. Поверьте вы узнаете то, что вам не скажут в туристических агентствах!

Did you enjoy the pictures of Botanic Garden in Blanes? I dream to go there again and hope you will do so as well. Share in the comments what you like about this garden?